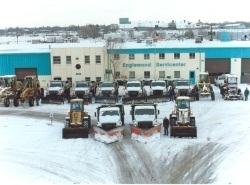 The Streets & Right-of-Way Services Division is responsible for maintenance of approximately 340 lane miles of streets.  The goal of this Division is to provide the highest level of service and response to the motoring public, but please know that sometimes the weather wins in the short term.

Three state highways pass through the City of Englewood and are maintained by the Colorado Department of Transportation (CDOT).  These highways are Highway 85 (Santa Fe Drive), Highway 88 (Belleview and Federal), and Highway 285 (Hampden Avenue).

Residential streets will not be plowed or de-iced unless they have steep hills with chronic icing problems, or a snow emergency is declared.  When accumulations are above 8 inches, we will “V” plow the centers of all residential streets.  Generally, we do not re-plow residential streets because that will typically just re-bury folks who have dug themselves out.  Warmer weather following a storm will naturally melt the remaining snow and ice.

Alleys:  We do not plow alleys, as they are narrow and there is no room to place the snow.  After a major storm, front-end loaders may run through alleys to help with accessibility.

Ice Removal Operations:  The freeze/thaw cycles Colorado experiences throughout the winter create large areas of ice buildup, especially on the highly-shaded south sides of the Avenues.   Street department crews have in-depth knowledge of and continuously monitor these locations.  When conditions create hazards to motorists, pedestrians, or cause excessive blockage to drainage flows, crews are deployed to address the ice dams.

Snow Phone Line / Service Request:  If you are concerned about specific areas in the city, please call our Snow Line phone number at 303-762-2520 or you may submit a service request.  Staff monitors the phone line and requests from 7:30 a.m. to 4 p.m. Monday through Friday, and periodically on nights and weekends during major storms.

Who is responsible for clearing sidewalks?

Residents are responsible for clearing their driveways as well as sidewalks adjacent to their property.  It is recommended that snow from driveways and sidewalks be placed in their front yards and not in the street.  It is illegal to push snow from parking lots on commercial properties into the City street system.

After the storm, the plow came through and plowed my driveway shut again.

Depending on the severity of the storm, cleanup/widening operations often take place within one to four days following the storm.  It is necessary to widen an available roadway to insure the ice and snow melts off the driven surface as quickly as possible.  Failure to do so will result in ice/snow packed roads too narrow to accommodate storage of snow from subsequent storms, and will prevent proper drainage, resulting in increased ice problems.

What if I have an emergency and my street isn't plowed?

If an emergency situation occurs, call 911.  Equipment will be diverted for emergencies ONLY WHEN REQUESTED BY AN EMERGENCY SERVICE AGENCY.  Police/Fire dispatch has constant communications with our staff during storm conditions.  It is a crime to make a false emergency request.

How can citizens help?